7-Day Transformation on the Colorado River 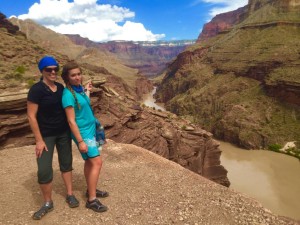 I have struggled to put into words the level and depth with which this rafting trip touched my heart and has impacted my life.  I brought my journal and tried several times to detail the experience that I was having.  This seemed impossible as I was simply savoring each moment of the journey too much to step away from the after-dinner crowd and I then found myself completely exhausted from the sheer exhilaration at the end of each new day.  I did not want to miss out on a single moment of this Colorado River experience. Though we had a few things that could have been seen as setbacks, I found that they did not diminish the rich experience for myself and I believe the other guests felt the same. My daughter, Vannah and I quickly felt a bond with our fellow river travelers.  Courtney and Josh who rode up front with us on nearly every single rapid.  The smaller ones made us laugh - I have never laughed so much in my entire life!  Hermit and Lava Falls rapids took our breath away!  Day-4 was dubbed our "Giddy up" day.   Linda, a delightful woman who has traveled to 100 countries with her husband, met a returning guest at the Marriott who had only one thing to say to them regarding the trip, he said, "Day 4-Giddy up".  We were shouting "Giddy up" with each new rapid. Josh told me, as we set out on the first day, that his friends were not afraid of losing him to the rapids they were afraid that he would not want to leave the canyon and come back.  How prophetic they were, none of us wanted to leave! The hikes were awe inspiring.  Eminence was a rugged hike and the views from the plateau were stunning.  Each waterfall we hiked to invited us to immerse ourselves in the bone-chilling water.  Kudos to Amy who challenged us to jump from the waterfall at Elves Chasm, we were so frozen and the water did not sound inviting, but it was such a fun experience!   Redwall Cavern was nothing short of magical as we ran in the deep sand and played an awesome game of Frisbee.  Blacktail and Matkatamiba Canyons both inspired a deeply spiritual experience that was very special.  Ben did a great job of setting the tone for us to take the Blacktail hike in silence.  I will always treasure the experience that I had on that particular hike.  Kelly was amazing on the flute in both of these locations which added to the beauty and serenity of it all.   I was in awe at Deer Creek Falls and Havasu.  Havasu seemed unreal it was simply breathtaking!  In all of my life, I have never seen anything as majestic as those crystal blue waters with the backdrop of the red cliff walls of the Grand Canyon. The Western River guides allowed us to challenge our abilities and find confidence in the triumph of achievement both on the hikes and on the rapids.  I came to admire Kelly's incredible skill at navigating the most challenging of rapids.  We viewed Lava Falls from above before we faced it.  It gave me a whole new respect for our guides extreme skill in navigating safely through the rapids.  Wow!  They are all simply amazing! My words again are inadequate to describe the depth of emotion from sheer elation and triumph to humbling awe and even reverence at God's magnificent creations. The setting of sharing this with such an incredible group of people was fantastic!  In the end, it felt that these fellow guests who had spent only 7 days with us were new friends, even family.  They all welcomed and embraced my daughter.   Vannah, who was the youngest of our group  loved each and every minute of this adventure!  It was sad to leave the canyon and our new found friends.  We drove home utterly exhausted but happy.  I found upon my return to reality that this experienced has changed me.  Kelly said, as we were concluding our trip, that we were now a part of the canyon walls, a part of it's history.  I felt that I left a part of me there and somehow returned with a part of the canyon within me, a new found perspective. Gone from my shoulders was the stress I had left with.  A desire to savor each moment, to breathe it in and be present was born.  I have found that I am listening with new ears and seeing the world with new eyes.   I hope it is a change that will last forever or at least until my next river trip!  Bonnie - UT Arizona - Grand Canyon Rafting 6 & 7 Day
Western River Rafting Trip