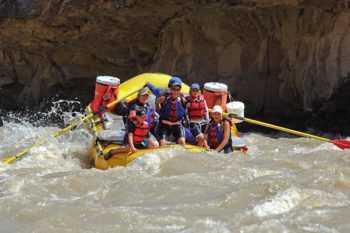 If you plan to do a family rafting trip, pick the right level of adventure for your family - and then sign up with Western River Expeditions (WRE). A friend has been beating on me for the last few years to take my family rafting down the Grand Canyon. With a 12 year old girl who has not had a lot of experience away from home for an extended period, we thought that a 9 day trip could be a disaster if she was unhappy after day one. We loved the concept so opted for what was touted as a more family-friendly, shorter option...Desolation Canyon. It was as close to perfect as the weather and conditions would allow! Yes, I would have preferred a bit more challenging water (although my wife and daughter were perfectly fine with the class 2 and couple of class 3 rapids). Given that the flow rates were down due to the drought, even the class 3 water was not quite itself (however, the first instance of class 3 water was adequate to flip the two-man inflatable kayak my son and I were less than expertly navigating! Note: even hanging on to the kayak and what little was left of our pride, that rapid run was a blast!). Furthermore, I am not a huge fan of 105 degree days, regardless of the lack of humidity...and especially when all five days are set on bake mode at 105. Aside from those two gripes, I can't find much to complain about.

On the positive side, it would be foolish to start anywhere but with the guides. Our leader, Aimee, was capable, confident and delightful. She had the respect of the other 4 guides and approached everything with a positive, unshakable attitude. There were a couple of operational hickups along the way - and she met them head-on with a smile on her face with the end result having no real impact on the guests' experience. The other guides picked up on that vibe and were each fantastic in their own way. I must, however, take a moment to focus on one of the guides....Jacob. While I understand that he was the least experienced guide of the bunch and this was his inaugural run down Desolation, his infectious personality and rapport with ALL of the kids was extraordinary!!! By afternoon of the second day, all 14 kids were lined up to get on his raft (the rest of the trip, it was not unusual for one of the other rafts to be empty). He kept the kids entertained all day on the river and then would play games like spikeball, frisbee, or some made-up game until the parents dragged their urchins off to bed. I never saw anything but a smile on his face! He was downright awesome!!!!

WRE has obviously done this enough that they have perfected the organizational structure. The schedule went off without a hitch (even when one of the two outboard motors for the raft floatilla broke on day one and was inoperable the rest of the trip). The rafts were suitable, the accommodations were spartan but pretty comfortable (I am a 61 y/o with a fake hip and two bad knees and must admit that the cot and sleeping bag were not bad). And then there was the food (all of which is packed on the rafts for the whole trip): awesome full breakfast each morning to get the day started off right - great lunches with options for the kids, a couple of snacks in between and top notch appetizers and dining at night. We even had ice cream on night 3! Despite the heat, I still gained weight!

The scenery was epic, the water was delightful (especially given the blast furnace set on 105), the daytime sky was a deep blue and the night sky was a veritable starfest! Was a bit disappointed not to see much wildlife - but at 105, they were obviously more intelligent than us!

The guides did a great job of helping break the ice between the 6 families and by day two, we were all friends and had a blast together!

Yes, the trip was excellent in every regard. And I am sure that there are other outfitters that handle the planning, logistics and dining equally well - but what really holds everything together is the guides. I cannot imagine that any other group of guides could have made my family's adventure as special as Aimee and her team made our trip down the wonderful Desolation Canyon. Many thanks!!!!