A recent wall post on Western River's Facebook page has given me pause to reflect back on the original white water rafting trip on the Colorado River through the Grand Canyon experienced by John Wesley Powell and his crew in 1869.  The facebook comment spoke of near drownings among sheets of ice on a remote Alaskan river re-enacted on a TV series called "I shouldn't be alive".

I reassured the Facebook fan (commentor) that Western River trips only had ice (plenty of it) for drinking cold lemonade all the way down the river from beginning to end. (Mentioning of course that we would not be leaving anyone in any remote areas to "survive their way out"). I think/hope that relieved him and inspired confidence in other readers that rafting down the Colorado River is not as "hard core" as even watching dangerous TV shows from the safety of your couch. (Well, you get the idea).

But while I hope it inspired confidence for folks interested in doing a Colorado River vacation, I should take this opportunity to draw a contrast between the trips we are able to run through the Grand Canyon nowadays with cots, camp chairs, dry bags, gourmet meals, and expert guides versus the hardship of that first fateful trip through the Grand Canyon. For an example, the height of luxury available to Powell on his second Grand Canyon Expedition consisted of a wooden chair strapped to the deck of his boat. 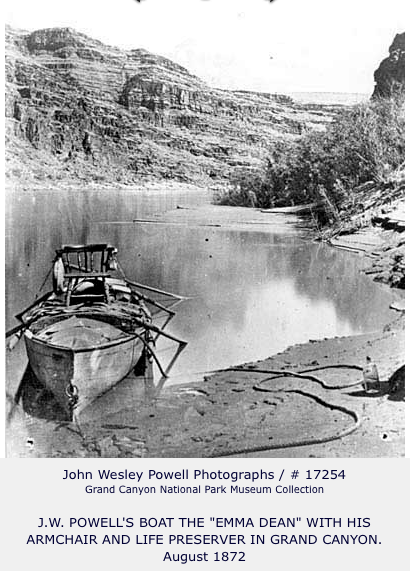 In these uncertain and challenging times we live in, it is insightful to hear of the challenges and uncertainties that were real to those in another time. (Not to spoil it, but those who stuck with the river did make it out alive). I'll give you John Wesley Powell in his own words and then leave you to comment as you like:

"We are now ready to start on our way down the Great Unknown. Our boats, tied to a common stake, chafe each other as they are tossed by the fretful river. They ride high and buoyant, for their loads are lighter than we could desire. We have but a month's rations remaining. The flour has been resifted through the mosquito net sieve; the spoiled bacon has been dried and the worst of it boiled; the few pounds of dried apples have spread in the sun and reshrunken to their normal bulk. The sugar has all melted and gone on its way down the river. But we have a large sack of coffee. The lightening of the boats has this advantage: they will ride the waves better and we shall have but little to carry when we make a portage.

We are three quarters of a mile in the depths of the earth, and the great river shrinks into insignificance as it dashes ite angry waves against the walls and cliffs that rise to the world above; the waves are but puny ripples, and we but pigmies, running up and down the sands or lost among the boulders.

We have an unknown distance yet to run, an unknown river to explore. What falls there are we know not; what rocks beset the channel, we know not; what walls rise over the river, we know not. Ah, well! We may conjecture many things. the men talk as freely as ever; jests are bandied about freely this morning; but to me the cheer is somber and the jests are ghastly."

I can't tell you how glad I am to be able to be a true adventurer and still be able to eat New York Strip steaks with a knife, a fork, and a frosty beverage as I watch the river roll by. Jests that are bandied about freely on the river are always welcome on a trip with Western River!