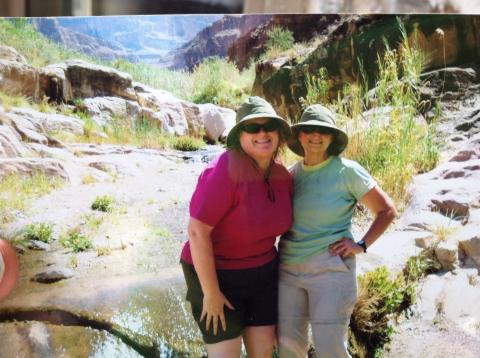 My best friend from childhood , Debbie (in pink) and I (in green) went on the 4-Day Grand Canyon trip in August 2007. We had the time of our lives! The guides were terrific and the other guests were so much fun. From the the mini plane ride we took from Las Vegas which Debbie described as “lawn chair…aisle…lawn chair” to the “International” landing strip in the middle of the desert at the ranch where we were lucky enough to shop at their 1/2 off table…before our helicopter ride to the most beautiful place either of us had ever been: the Grand Canyon.

The meals were excellent and rafting was so much fun and we also got to hike some of the trails on our stops. Debbie and others jumped off some big cliff into the river while I took pictures..I was too chicken. My favorite story is the 3rd night we were in our campsite trying to sleep on our comfy cots and Debbie says to me ” Hey , I think a bat just flew by.” I told her it was probably a bird and to go back to sleep. About 5 minutes later the bat flew near my head I picked up my cot and sleeping bag and took off running to a different location. She said what are you doing ? I said ” I’m getting outta here! There are bats!!” She said “Oh, when it’s near me it’s a bird, but near you it’s a bat!” She grabbed her cot too and we took off running. I think we slept 2 feet from the river that night.

My best friend lost her battle with pancreatic cancer in April 2013 and I am so blessed that we had that trip together and I will hold onto those memories for the rest of my life. I would like to win the contest and give the trip to her sister, Elizabeth, and niece, Reilly, 14, with whom Debbie wanted to do the trip with when she was old enough.