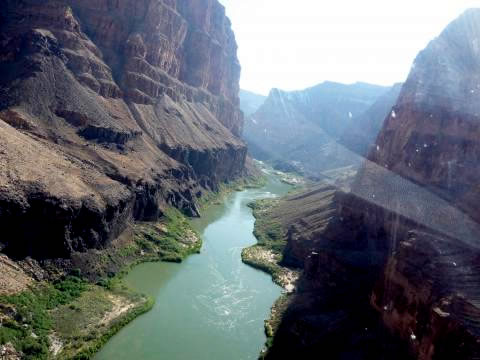 After a night at the horse ranch, I was the first on on the helicopter (to balance out the pilot and the luggage). As we flew out over the edge of the North Rim and banked eastward over the river, I took this shot. The pilot left me and the luggage on a teeny, tiny sand patch (landing pad) alone for about 10 minutes at the edge of the river. Alone. In the Grand Canyon. By myself. I had been waiting for this trip for a lifetime…and here it was. Me and the Grand Canyon. The awesome grandeur still brings tears to my eyes. And that was only the beginning. Several minutes later, more helicopters brought the rest of the 28 passengers and two rafts showed up after 7 days of rafting–right on schedule! And we were off…for three days and two nights of unforgettable rafting, hiking, camping, exploring, and getting to know each other.