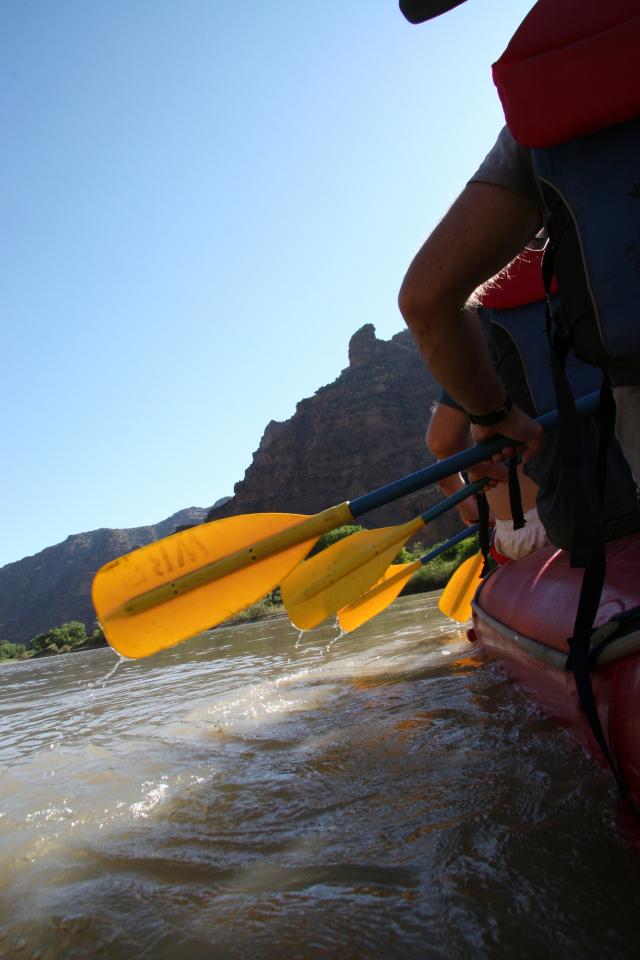 As I write this, we await word on whether budget bickering in the U.S. Government will have an effect on our river trips through the National Parks. The politics of this potential shutdown are unfortunate and disappointing to be sure. Hopefully it amounts to nothing but a scare. We’ve contacted those whose trips may be effected just to help them be aware of their options. For now, we’ll play it one "rapid" at a time. In the meantime, remind congress of the domino-effect this could have on more than just government employees and camping plans in National Parks.

By the way, this isn’t the first time that politics has had an impact on river rafting in the Grand Canyon…

Even our first commercial foray into the Grand Canyon, in 1963, ran dry (literally) with the new Glen Canyon Dam cutting water levels to a trickle–well below the flows they promised. (Read more about that trip here).

Political influences have not always had a negative effect on rafting in the Grand Canyon.
As Interior secretary in the 1960s, Stewart Udall played a central role in keeping dams for hydro-electric power out of the Grand Canyon. Mr. Udall took a trip with Western River Expeditions to see the canyon for himself. He emerged from the canyon fiercely against any dams being proposed. Thank goodness The Canyon spoke to such a key player in the fight against the dams.

Politics can be mysterious too: while guiding in the latter part of the 90’s, then Vice-President Al Gore decided to take a jaunt down the canyon. I watched Secret Service agents get a lifejacket check and safety speech at Lee’s Ferry. (No, they weren’t wearing dark suits and ties). There was even a bomb-sniffing dog at the ramp to check all the boats launching that morning before guests arrived. I never got to see the Vice President, or learn why he was doing the trip, but coming back to civilazation 9 days later I heard talk in the news about some kind of "Whitewater Scandal"… I wondered what could possibly have happened on his river trip?

There’s no conclusion to the budget quarrels yet, but for a closing remark, I want to echo a phrase I heard a Paddle Boat captain shout to his fellow paddlers as they headed over Big Drop 2 in Cataract Canyon: "EMBRACE THE CHAOS!!!!" We make it through one way or another. At least we live in a country where we all have paddles in our hands!