There is a running joke among river guides that even though the boys might be bigger and stronger (thanks science) us girls are much better at rowing a boat. Girls are better at it because we use our entire bodies. Feet against rocket boxes to push off, we dig our oars deep into the water, lift ourselves off our seats with leg and core strength, pull back and in the last move, use our arms and back to pull the oars out . Repeat. We learn to read water like the best of ‘em and stay in current. We put everything we got into getting down the river.

Our male counterparts tend to just use their arms while glancing back at the water every now and then. It’s a silly joke but to be a female river runner is an honor. One that we owe to the brave and brash women who came before us. So, this is to the women who told those boys to move aside, it’s our time to row the boat! 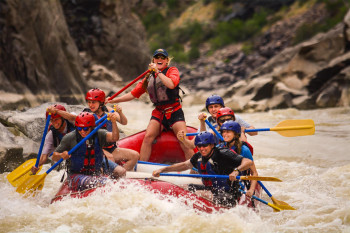 One of the original boatswomen, Georgie White, started rafting throughout the west in the late 1940’s. She was already married but she fell deeply in love with the Colorado River. (Same, girl.) She was fearless and would sooner swim Lava Rapid before she listened to those telling her that women didn’t belong. She revolutionized what it meant to be a woman on the river. 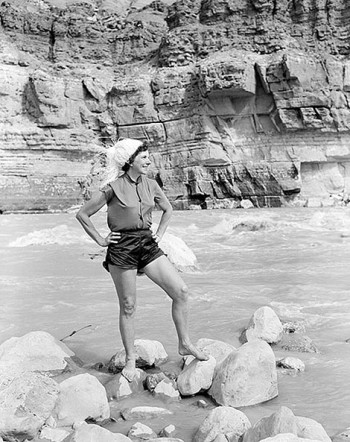 In the 70’s, expectations for women in the world and on the river were changing. Women were trying to find jobs river guiding and were told things like “you’re a pretty girl, but we don’t hire girls.” A sentence, if I heard when I applied to be a guide, would have ended with more swear words than even the saltiest of boatsmen would approve of! But as we have seen throughout history, these women didn’t give up and gave themselves to their passion.

Women continued and eventually found their spot in the Grand Canyon and in guiding. One boatswoman said, “if we’d screwed up, history would have been rewritten. If we hadn’t been able to handle the boats, do you think they would have put another one of us on? So we did it! And it was fun!”

Last summer, we got an email from a guest who wrote “Tori and Abi, you were fantastic female leadership role models for my girls…you may not realize it but that’s a powerful and inspiring impact you’ve made on them”. It’s an exciting and important thing to be a boatswoman. To be women who do what we are most passionate about and we’re stoked to be a part of the legacy. My fellow guides are some of the toughest, most courageous and hard working people I have ever met. These women have taught me to row a boat, run rapids and thrive on the river. They walk through life with a strength, grit, humor and an outlook on life that inspires me every season to be a better guide and a better person.

So, next time row like a girl- with everything you got.

Rafting Trips on the Green River 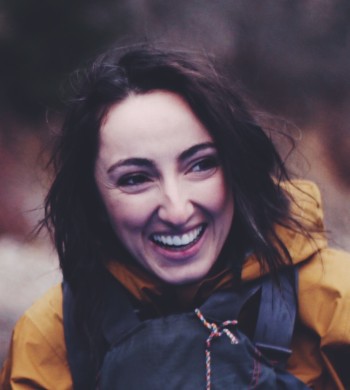 My name is Abi! I've been with Western for 4 years and guiding for 3. I was raised in California and moved to Utah as a teenager, it took me a while to love it but now I can't imagine living anywhere else. I love rafting, climbing and seeing the world. I spend my winters working in a treatment center for teenage boys. I absolutely love my winter life but I think I'll always obey the call to the great outdoors and will always find my way back to the river!