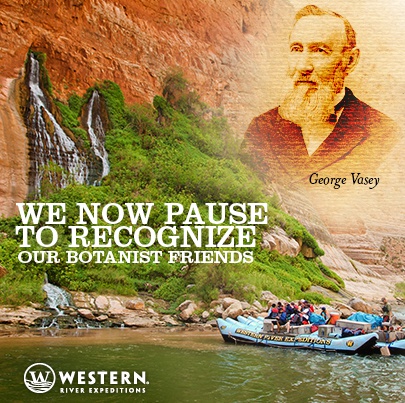 Rafting the Grand Canyon on a 6 or 7 day trip with Western River gets you to places unseen by the millions who visit the canyon on the rim each year. Though impressive from the rim, the canyon as seen from the river offers much, much more than meets the eye from the rim. Vasey’s Paradise is one such wonder. The gorge is narrow at river level, which keeps the view of Vasey’s Paradise hidden from view almost until you are right in front of it, or just downstream. Usually visited in the morning, the eastern sunrise makes the wall sparkle in a cascade to the river. This is the first waterfall stop, of several, on a 6 or 7 day trip while rafting the Grand Canyon. Would you like to plan your Grand Canyon rafting trip now?

On the original trip down the Grand Canyon, this waterfall gem was a pleasant surprise for John Wesley Powell and his men. Powell names the gem “Vasey’s Paradise” after his botanist friend George Vasey because of the diversity of plants – including poison ivy – found in the lush desert garden oasis. Sadly, George Vasey never got to visit the earthly paradise named for him, as the rubber raft would not be invented for another 80 years or so. Powell’s men likely took a good long drink from the sparkling waters, but the scarcity of their food supply kept them moving on downstream to a yet unkown canyon. Just a mile downstream they would encounter a giant cavern, Redwall Cavern, also named by Powell.

Other interesting notes about Vasey’s Paradise: