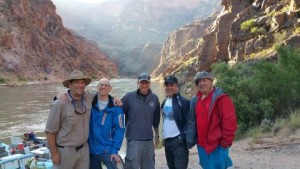 I had been waiting to do a river rafting adventure for over 15 years so when the right time came up, I jumped on the opportunity to go, along with four friends. If river rafting down the Grand Canyon has always been something that you wanted to do, I don't believe that there is a better company to do it with than Western River Expeditions (WRE). We opted to do the 4 day Arizona Grand Canyon Rafting & Ranch trip and it was truly a trip of a lifetime. We met up at the Marriott Las Vegas Convention Center with a bunch of other travelers on a Saturday morning (you don't really have to arrive too early as if you are there about 30-45 minutes before the departure time, you will be fine), received a box breakfast (nothing fancy so you might want to eat before you arrive or eat at the restaurant in the hotel) and then headed out on a 45 minute bus ride to Boulder Municipal airport. It took about an hour before we departed for a 45 minute flight to the Bar 10 ranch in a 10 person propeller plane (there were also three other slightly larger planes to take the other travelers).

The flight to the Ranch was pretty amazing and if you can sit on the right side of the plane, you'll get some great views of the Hoover dam. The flight was a little bumpy, which is normal according to the pilot so keep that in mind as you land on a very simple landing strip at an altitude of about 4100 feet in the early afternoon. Once you get off the plane, you grab your bag and head onto another bus for a very short ride to the Ranch. There is a brief introduction from the staff (all of them were very welcoming and extremely friendly) and they tell you about some of the activities that are available. You can do horseback riding, listen to a talk about the ranch by Garth (a very experienced ranch man), do some skeet shooting or take an ATV ride (optional cost for the ATV ride). 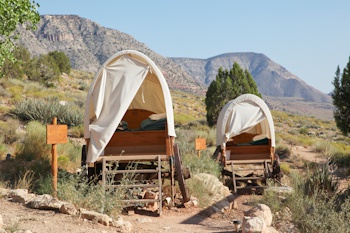 Plus, you get assigned your sleeping quarters and here's where you begin to really embrace the adventure. There are three sleeping areas that are available but you are assigned one of them by the Ranch. There is inside the ranch in a room with two bunk beds (each with two beds), outside in a covered wagon (for two people) or on the deck of the main guest house, under the sky and stars. You don't get a choice so just go with the flow, regardless of what you get. We were placed on the deck so we dropped our bags off on the deck, grabbed some sleeping bags and pads and set things up before spending the rest of the afternoon doing activities. Had dinner a little before 6, went on the ATV ride (it was a lot of fun and we stopped on the edge of the mountains with some amazing photos) before returning to the ranch (the ride was about 70 minutes in total). There were bathroom facilities both inside the main house and outside as part of the main house along with a bunch of showers. The staff performed an hour long variety show, which was fun and truly part of the experience of being there. We headed up to the deck on a beautiful night and apart from it being a bit cold (high 40'sF, low 50'sF), it was pretty amazing to be under the stars at night as they were as bright as bright could be. It was a little cold for me so I headed into the main guest house to find a corner to sleep along with some other people.

We woke up the next morning around 5:30, had breakfast and then waited around until it was time to leave via helicopter into the canyon. There were a lot of people coming out of and going into the canyon so it took a while until we finally got going. The helicopter ride into the canyon was about 7 minutes but if you are lucky enough to sit in the front seat beside the pilot, it is AMAZING! The views were spectacular as we dropped into the canyon, grabbed our bags and headed down to the shore. The six day rafting group was pulling up to the shore just as we arrived so they got off the raft and we received our day and dry bags to pack our stuff. WRE does a great job with their packing list and I would highly recommend following it as best as you can. The weather in the canyon can be quite fickle (a couple of weeks before our trip in April, I talked to someone who was told that it had hailed) so although I did not use about half of the gear, I was really happy that I had it all since the weather almost turned a bit nasty but did not. The WRE suggestion to pre-assemble a day bag was also a terrific suggestion since it saved a bunch of time while we were getting ready to go onto the raft. It took about 90 minutes for us to get going, 13 guests on one raft and 15 guests on the other raft along with two guides from WRE on each raft. The guides, Ben, Kurt, Johnny and Lat were just FANTASTIC and certainly some of the hardest working people I have ever seen. Apart from the time that they got to sleep at night, they were always in motion doing something but at the same time, always friendly and approachable.

We received a briefing on the operation of the boat and the safety aspects of the trip (rule #1 for sure, don't fall into the river!) and then we were on our way. Kurt told us that the rapids in the canyon are rated 1-10 as opposed to the normal 1-5 and our rapids would be in the 1-7 range (the 8-120 rapids could found on the longer 6/7 day trips). If you want to get wet, stay at the front of the raft. You'll still get wet in the middle of the raft but if you are at the back of the raft, you'll barely get wet (not much fun in that). We went through some nice rapids although the bigger rapids would come on day #2. I sat in the front and as long as I held on tight (I would highly recommend a pair of neoprene gloves), there was no problem as I got soaked. We rafted for about 4 hours (a couple of stops in there) before stopping at our base camp for the night and unloading the raft (everyone pitches in to help). We received instructions on setting up our cots and tents (not necessary this night as it was beautiful) and then staked our claim to our sleeping area. It's really important to find a good sleeping area so keep that in mind as soon as you have the chance to find an area. Flat, close to the river, a slight distance from the eating area and from the bathroom area are all key things to think about when you are searching for a site to sleep. We took a quick bath in the river (soap up first and then splash off the soap since the water is pretty cold) before relaxing until it was time for dinner. 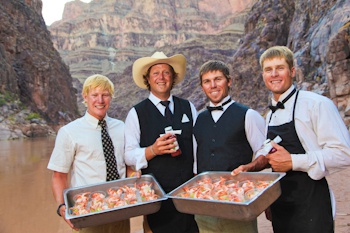 The food throughout the trip was good and there was no shortage of things to eat, although as a last resort, there was always PB&J. After dinner, our group got together to talk about why were on the trip and we pretty much all shared the desire to see the canyon. It got dark around nine so we headed to our cots and sleeping bags (take out the heavier sleeping bag even if it is warm since early in the morning, it can get a little cool) and enjoyed a gorgeous sky with more stars than I have ever seen!

In the morning, we got up around 5:30, had breakfast, broke down the camp, loaded up the boat and headed out for another day on the river. The rapids were a little more challenging but still a lot of fun and we stopped a couple of times, including once where we did a hike into an area with a waterfall. It was not a difficult hike but there were a couple of challenging areas so make sure that you have some good footwear. The weather turned a little cooler and cloudy and along with a nice wind, we ended up putting up our tents at our second base camp. Once again, the surrounding scenery was just amazing and after dinner, we sat around chatting and drinking (bring your own beer and spirits) before heading off to bed. The tents came in very handy since it rained a little a couple of times but the tents had rain covers so everyone was dry. 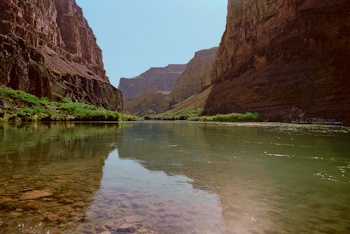 Day #3 was the easiest of the three as we set off for the last leg of the trip, which did not include any rapids and it was just an easy ride down the river, with views that could only be described as spectacular. It was a marvelous way to end off the trip as we headed to jet boat pick up point and arrived around 11am after 3-4 hours on the river. We said goodbye to our guides, boarded the jet boat and waited for the second group from WRE to arrive before setting off for a very fun 45 minute ride to the bus pick up point. The views on the jet boat ride were also pretty amazing and when you finally exit the canyon, it just kind of ends, and so does the trip. The first part of the bus trip lasts about 30 minutes as you go along a semi dirt road on an older bus before finally hitting the pavement and transferring to a coach bus for the two hour ride back to the hotel. People start turning on their cell phones on the bus and once again, you're back in civilization. However, you will have photos, videos and memories that will last a lifetime. What a trip! I'd like to THANK everyone at WRE for an AMAZING adventure. I could not have asked for a better trip and the opportunity to share a trip of a lifetime with my friends! Jeffrey - Toronto, Canada Arizona - Grand Canyon Rafting & Ranch 4 Day
Western River Rafting Trip