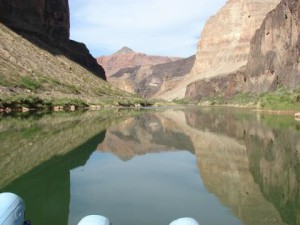 We shoved off from Lee’s Ferry in a raft of powder blue.
Eighteen anxious passengers and two well-seasoned crew

Gliding through Marble Canyon, our faces filled with awe
Marveling at the canyon walls and the wildlife that we saw

Reminded of early explorers, in whose hearts courage did sure abide
By the inscription left of FM Brown, on the rock by river side

Then we pulled up to a wondrous place called Vasay’s Paradise
Where the beauty of nature’s architecture, was reflected in our eyes

Next came the Redwall cavern, just a short way down the river
The grandeur of that massive cave caused our hearts to quiver

Thus far, the rapids were somewhat tame, caused none of us to fear
Just splashed with cool water, we were none the worse for wear

The Anasazi Foot Bridge was high up there on the cliff
We rafters knew that crossing it, must’ve scared those folks plum stiff

For we were living luxury as we explored at present date
We slept on cots, ate grilled ribeyes, and sweet blueberry pancakes

Next came the Little Colorado, its’ water the color of our boat
Where we each donned our life vests and enjoyed a peaceful float

We rafted through the Unkar curves past Furnace Flats and then
Entered into the Granite Gorge, with shadows and cool wind

The rapids had got more interesting; Unkar had opened up our eyes
So when Hance Rapid dropped more than thirty feet, it came as no surprise

The brave ones thought the front seats best, the chickens filled the rear
While Newty manned the tiller and did his best to steer

We floated past a black steel bridge, and looked toward Phantom Ranch
And the Cottonwoods of Bright Angel Creek, that peaceful river branch

Then came a series of great rapids, Granite, Hermit, and then the Gems
Topped off by one named Crystal, no enthusiast condemns

Each evening as the sunlight dwindled, the guides set up our camp for night
Where gourmet food they did prepare and their dessert was pure delight

On through the canyon’s inner miles, we thought we’d seen the peak
In Deer Creek Falls and Elves Chasm, until we saw Havasu Creek

It was a color, hard to believe; the blue dyed water held our gaze;
We hiked up the creek to take a swim; a memory to last us all our days

Then remnants of an ancient lava flow, that once had dammed the water
Its’ black rock absorbed the sun’s red heat and only made the canyon hotter

Then we scouted Lava Rapids, from up above those river falls
Women prayed for strength and safety; men just prayed they had the b-bravery

Too soon, came that last evening, with faces lit by a lantern’s fire
Some dressed in sheets called togas; others in formal attire

We’d met some new forever friends, not a one of them was snooty
And our guides were awesome people, too; pretty Veronica and ol’ Newty

The seventh day brought a peaceful float and then a helicopter ride
To the canyon Grand and our Western River Adventures friends, we had to say “goodbye”

But we won’t cry and we won’t grieve, for we know it’s never too late
To sign up for that next three day trip, although one year we’ll have to wait