What Would I do Differently?

With Major John Wesley Powell's birthday quickly approaching on March 24th, I have been thinking about his journeys and what I would ask him, if I had the chance. I guess one question I would ask would be, “If you could travel down the Colorado River through the Grand Canyon again, what would you do differently?”  Then, I asked myself that same question.

I honestly believe that there is nothing that Western River Expeditions could do to make a seven-day Grand Canyon rafting trip any better than it was last summer.  We had great people, guides, weather…but there are a few things that I "personally" would do differently.

First, I would take more pictures.  I felt like I took a lot, but when I got home I realized didn’t.  I would take more “detailed” shots like the inch thick steaks on the grill or the hummingbird that joined us at our campsite.  I would take a waterproof camera.  I would ask the guides more questions.  I wish I asked for a few recipes from the meals we had.  I also wish I asked to drive the raft through an easy rapid (the worse thing they could have said was no).  I would have tried to stay awake longer at night so I could see more shooting stars fly across one rim to the other.  I would not have been so excited about what was around the next bend, but I would take in everything possible right where I was at that moment.  I would take a comfortable sundress for camp.  As silly as this seems, someone else wore one each evening and I thought how nice that would be at the end of a tiring day.  I would have danced with the kids that night after Crystal.  I thought maybe people would think it was silly, but I know now no one would have cared.  No one judged, no one criticized.  I would have jumped off the top of the waterfall at Elves Chasm.  I am not sure why I didn’t.  I did everything else, even jumping off the raft into 50-degree water for a measly Swedish Fish, which was the best tasting Swedish Fish I ever had.

Finally, I would not feel guilty doing this trip again.  After taking a look around me, I realize that life can take an unexpected turn at any moment.  We are on this earth for such a short time compared to the age of the Grand Canyon.  We are meant to enjoy it!  This summer I won’t be visiting that same river and canyon, however I can follow my own advice when we travel the Green River through Desolation Canyon with Western River! Better yet, I could book another Grand Canyon trip for the not so distant future. 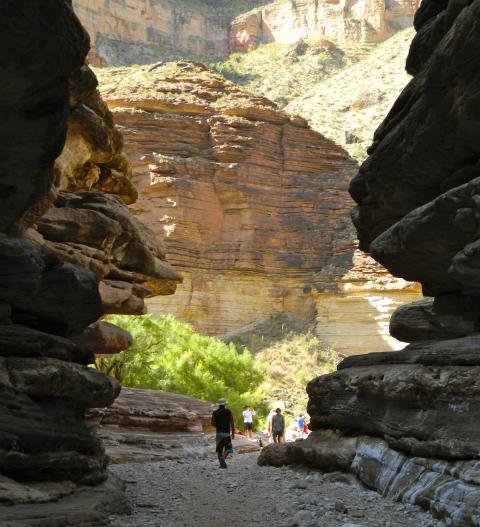