When the River gets in your Blood…..Proceed with Caution (to Grand Canyon) 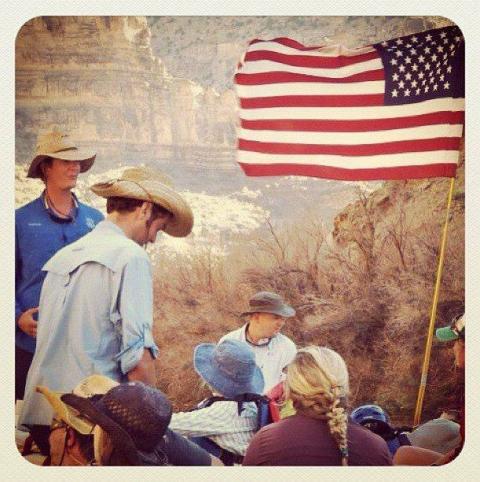 In 2010, my husband had the bright idea that for our 25th anniversary we would revisit the Grand Canyon, this time by boat. I nodded and agreed while thinking to myself that this will pass and I will never hear of it again.

In June 2011, we were flying to Vegas to revisit the Grand Canyon, and yes, this time by boat. I stood corrected. I was nervous, I was trying to put on a good front, I was repeatedly asking myself what happened to that trip to a warm tropical island for our anniversary. I will have to admit, that first night I thought more than once that I would not make it for seven days on a raft with 24 strangers.

…and then the river got in my blood. I am not sure when I took the turn or what pushed me around that corner. I was bit – and got bit hard – by the “river” bug.

It may have been the 360-degree beauty that surrounded us each and every moment. Words alone can’t begin to describe it. Your senses are fully aware of the colors of the canyon walls, the sounds of canyon wrens, and the feel of hot air verses cold water. Seven days of full immersion in awe-inspiring beauty changes a person.

It could have been the excitement of the guides. This was their job, they have done this so many times but they were genuinely excited! They spoke about each section of the river and upcoming rapids as if it were the first time they got to experience it. They were amazing leaders, cooks, and musicians. They found just the right balance of taking us out of our comfort zone but assuring we were safe.

Was it the calmness of it all? Adding the calmness of being “unplugged” from the rest of the world, the lack of light pollution, the nonexistence of noise pollution equaled a tranquility one rarely gets to experience in our society today.

It may have been the respect we gave one another. We started as strangers and ended as friends. We were all equals at the bottom of the Grand Canyon.

Finally, it could have been the respect for the river. We knew the river was in control. We could feel others that were there thousands of years before us. We knew we were the visitors, but we gave the respect needed to complete a safe journey.

While I live 2,000 miles away, I still feel that tug towards the river every day. The river has won the battle. Someday I will get back.