This promises to be one of the top 10 best high water years on record for the Colorado River System.  This is especially true for Utah’s Green River.  For raft enthusiasts and whitewater adrenaline junkies 2011 is THE year to book a river trip through Westwater or Cataract Canyon on the Colorado River or Desolation Canyon on the Green.  Also, the Bureau of Reclamation is releasing extra flow from Glen Canyon Dam which means higher water through the Grand Canyon this year (The water release strategy is an effort to increase the level of Lake Mead).

High water may continue through late July this year; ordinarily, it tapers off at the end of June. You can monitor Colorado and Green River flows on a daily basis by going to http://www.cbrfc.noaa.gov/rec/rec.php.

As of mid-May, the water content in the mountains of the Colorado River Basin is the fifth highest on record, potentially making this year one of the 10 best high water years ever, with 1984 setting records when the flow in Cataract Canyon peaked at 114,000 cubic feet per second (CFS).  In 1983 it peaked at 103,000 CFS.  The current snowpack is 10 percent behind where it was at this point in 1983 and 20 percent behind where it was in 1984. Anything over 50,000 CFS is considered significant.

There is no way to accurately predict because there are so many variables such as how quickly will the weather warm-up and the amount of spring rainfall. These factors could either cause the water to peak quickly or come down more gradually creating a nice sustained flow that stretches later into the summer. But based on the snowpack and the long-term weather prediction, we could easily see levels around 70,000 – 80,000 CFS on the Colorado River through Westwater and Cataract Canyons.

High water brings with it a couple of pluses: some of the rapids are bigger and more exciting and the river moves faster so there’s more time for side canyon hiking and exploring.

Desolation Canyon on the Green River, again thanks to snowpack, will be spectacular.  It’s still a more moderate river as compared to the Colorado River, but a great number of the rapids become a solid Class III https://www.westernriver.com/whitewater-rafting/levels, and it is incredibly fun.  It is rarer for the Green River to get big, so this could be a once-in-a-lifetime opportunity.

The larger waves and increased river speed present challenges so we spend extra time in training preparing our staff.  Our philosophy is that we always prepare for the most extreme conditions and if we don’t have them, it’s ok to be over-prepared. 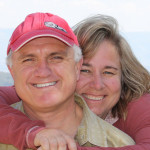 Brian started his river career in 1984 and thought it would be a good summer job while in college. Along the way, he met his wife Dena, who also worked as a guide, tried a different career for a while, but came back to the river. His two older children have worked as river guides and his youngest is waiting his turn. Brian now serves as President and CEO of Western and is grateful, every day, for the wonderful people with whom he gets to work.