Here's a list of must-reads and favorite books to enhance your experience in canyon country and expand your knowledge of life in the desert.

If the southwestern desert is a foreign land to you, then these books are fantastic intro to the unique lifestyle and mindset. If you are an arid local, then some wise words from ole' Ed Abbey can help you to remember how to speak for the place with howling wind and no societal voice. Both of these books convey the importance of the seemingly invisible teeming life in the desert. Edward Abbey could be described as the "John Muir" of the southwest. Learn about human history, river history, and desert history through quotes and stories in these enthralling memoirs.

Kevin Fedarko is well-known as a "literary all-star" for Outside magazine, and he tells a remarkable story about the beauty of the Grand Canyon, the strength of one boisterous river guide, and the fastest race along the emerald mile in a small wooden boat. The author is a retired river guide, so he is able to provide an intimate perspective to one the long-time careers in the area. This is one of the best intro books to the history and spirit of the river rafting community. The river is the major artery keeping the desert alive, and this book is equally as vital.

Where The Water Goes - David Owen

The author performs an incredible task, and he documents it well. He traces a drop of water from the headwaters of the Colorado River until it peters out in the non-existent Salton Sea. This book is a must-read to awaken us to the urgency of water conservation. Believe it or not, water is worth more than gold in the West, but it is equally as difficult to find. One of the most prominent explorer in river history, John Wesley Powell, knew the value of water in the West and he tried to be the first word of warning.

Down the Great Unknown, The Promise of Grand Canyon, Beyond the Hundredth Meridian, and many others

John Wesley Powell is the main character for all of these historical novels. Powell was one of the first voices for the West. He renamed the Great Unknown. He earned bragging rights for being the first man to descend the entire length of the Grand Canyon via the Colorado River. Each book tells a story of the first descent in 1869 and his second descent in 1871. Each book also provides various details of geology, maps, water ways, and this info is still used on current publications. You wouldn't want to miss Powell's fascinating history when you visit canyon country.

Among other favorites that deserve recognition are:

All My Rivers are Gone - Katie Lee

Breaking into the Current - Louise Teal

I am the Grand Canyon - Stephen Hirst

Instead of floating through the red rocks on an emerald stream in the Grand Canyon, I'm quarantined in a lovely living room with a functional word processor. This season will be my 5th at WRE, and it is already proving to be memorable. Primarily, I lead trips down Cataract Canyon and swamp trips in the Grand Canyon. I'll be here until I can cope with obtaining a full-time "sock" job (a job where I have to wear socks). Hope you enjoy my writing, at least as much as I enjoy learning how to cook in a kitchen vs. the riverbank! 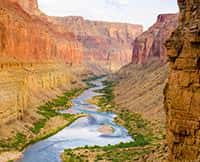 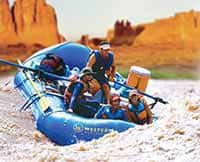 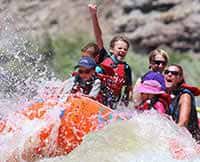