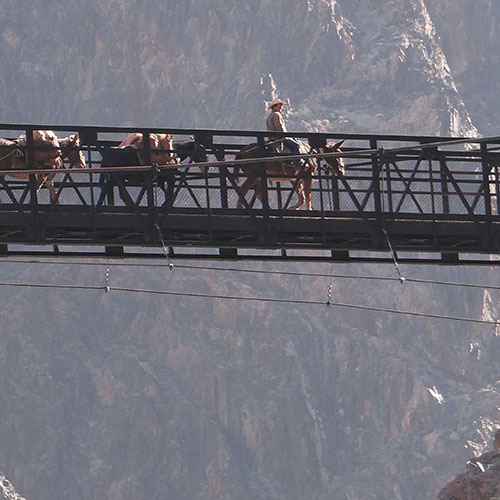 The Kaibab Bridge, originally a “swinging bridge”, was completed in 1921. In 1928, a much sturdier suspension bridge was built to replace the swinging bridge. Many of the supplies to build the bridge were hauled into the canyon from the rim by Havasupai men. Today river runners refer to the Kaibab Suspension Bridge as the “Black Bridge”. The bridge joins two of the main inner canyon trails, the North Kaibab and South Kaibab.

Phantom Ranch was originally developed by an enterprising man from southern Utah named Dave Rust. The “ranch”, was a gathering and resting area for travelers and hunters, and became known as Rust’s Camp. Teddy Roosevelt visited in 1913 as it soon came to be called Roosevelt’s Camp. Architect Mary Jane Colter developed the camp for Fred Harvey Company with permanent structures during 1921-22, she renamed the area Phantom Ranch. During the 1930s, the Civilian Conservation Corps (CCC) planted cottonwood trees and built irrigation ditches. The park service added a swimming pool in the 1960s, then drained it and filled it in during 1972. Today visitors to the ranch enjoy staying overnight in cabins, or tent camping in the campground. Food and refreshing beverages, carried into the canyon by mules, are served at the “Cantina”. Visitors can also send postcards from the ranch, also carried out of the canyon by mules.

The lower Grand Canyon, as traveled by Western's 3 or 4 day expedition begins at Whitmore Wash (mile 188) and finishes at Lake Mead (mile 277).