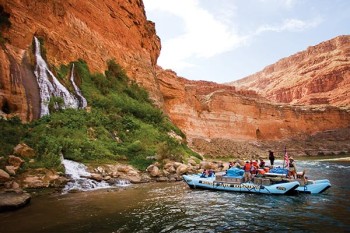 The GUIDES definitely made the trip… keeping us safe, well orchestrated, well nourished, well entertained, and very well informed. Our guides on this trip (our raft) were Evan and Nick, plus Steven and Jason (other raft)… they all worked seamlessly as a team, which gave the confidence to be as adventurous as we wanted. Can only speak for our raft, but Nick gave us a running dialogue throughout the 7 days on the history of the Grand Canyon and its early explorers, on the geology that had formed the sections of the canyon that we were going through that day, and on the fauna and flora that we were seeing. Their insight, knowledge, humor, professionalism and talents (including guitar serenades) really MADE the trip for us all… and they deserved every bit of the Western River Expeditions recommended gratuity.

Our raft was comprised of 14 people… 7 couples who all (more or less) already knew each other and most of whom were college classmates. That made it especially fun for us to be having this adventure together, and to be able to reconnect from 40+ years ago… and to update on the directions that each of our lives have taken in the meantime. The other raft was much more of a mixed group (of singles and couples), but all 28 of us did seem to get along well, and when we weren’t on the water we mingled and shared stories.

Life on the river was as adventurous as each person wanted. There were 9 “front row” spots for those who wanted to get wet in the rapids, including the very front 3 spots which in the major rapids were the aquatic equivalent of bronco bull riding (yahoo! suck rubber!). Behind them were 6 spots on the “buckboard” for those who merely wanted to cheer on those in the front without the face-full of Colorado River to challenge their splash suit. Further back were the “princess pads” which were largely empty at the outset of the 7 days, but which became highly regarded sunbathing spots by the end.

We passed a number of small rafts (and fiberglass open dories)… all of which were powered by OARS which were in the hands of those companies’ guides. While I’m sure that this was considered by the people on those trips to be far more “authentic” than our large engine powered rafts, apparently those trips take much longer to traverse the same distance, and are probably much more “exciting” (read “hair-raising”) when taking on the several Class 7-10 rapids. We saw several of these parties bailing water from their craft, and none seemed to be having a much better time than we were. Our two rafts had only one 30-hp engine for both steering through rapids and propulsion down the long quiet sections of the river, but we were told that each raft had TWO additional complete engines, “just in case”.

Meals were surprisingly wonderful, and may have been the biggest surprise risk factor of the entire trip …gaining almost 7 lbs of weight in 7 days through a combination of outdoors-driven hunger and truly excellent snacks and fare. Every night was a different camp-gourmet night, with surprisingly freshly made food of a different genre… and always plenty of seconds. Likewise breakfasts were also camp-gourmet, including (shockingly) actual Eggs Benedict one morning. Lunches were simpler, to keep the mid-day stops much quicker, but very creative and nutritious nonetheless.

Evening camp was always an interesting adventure. The stops were “guide-choice” based on what other companies were on the river claiming what sites for the night (all are first-come, first-serve). We never had to share a campsite with another company, and each person (or couple) was allowed to find their own spot to sleep. Cots were available and used by everyone… tents were available but optional. Most used tents for privacy in changing clothes and storing their personal effects, but then slept under the amazing stars in the dry warmth of the canyon.

WEATHER. We had the extremely good fortune to be the LAST trip of the season for Western River… mid-September, and we had PERFECT weather… beautiful cloudless blue skies and in the 80-90’s (vs 100F+)… desert dry and with NO pesky flying insects. And because we had missed the hot-rainy summer season, the river was a deep clear green instead of it’s normal silty muddy brown… and where the Little Colorado River joined it fed in crystal clear turquoise blue water. We were able to enjoy a wonderful couple hours swimming in that warmer (than 50dF) river water. The last day was a bit overcast, but that day was short as we ended our day helicoptered to Bar-10 Ranch for showers and lunch, followed by airplane flights back to civilization.

7 DAY vs 6 DAY. We had opted for the 7 day trip, which is basically the SAME route (188 miles of Colorado River starting at Lee’s Ferry, including 80+ rapids ranging in strength to (Grand Canyon) Class-10. We HIGHLY recommend 7 Days, because the extra day allows for more stops and side trips up canyons to several beautiful waterfalls and places of historic interest such as Indian relic sites. We can’t comment on the 3 Day, which is on a lower portion of the river (toward Lake Mead) with smaller rapids, less time outdoors, and probably less majestic sheer canyon walls.

Almost everyone OVERPACKED. In reality, we probably needed a minimum number of clothes, just enough to get out of wet clothes (washed nightly in the frigid river, along with our shivering body) and into something dry for the evening and night. (Not sure if we simply lucked out with a dry 7 Days in this regard… the trip might have been quite different in 7 days of rain.) The Western River website’s depiction of what to bring was certainly ample and accurate.

ALCOHOL. Bringing a bit of boxed wine and beer and spirits made the evening sessions quite enjoyable, for those who wished to do so. The guides had advised that the exercise and altitude lowered the intoxication threshold, which everyone abided, and there were no issues with that… since by mid-Sept darkness was setting in early, and we were usually sacked out by 8:30pm and then up at 5:30am for coffee. The guides for Western River all strictly adhere to a no-alcohol policy for themselves to keep alert in the event of any emergency 24/7 (apparently not all companies adhere to that same policy).

One of the more interesting aspects was attending to bio needs. The river itself became home to the call of nature for #1… men one direction, women the other. If at first that seemed immodest, by the end of 7 days there was little thought given. The guides were careful to ensure maximum sanitation to avoid “Montezuma’s Revenge” (which must be quite awkward when on the water for hours… but which thankfully no one experienced to our knowledge). Two #2 privy constructs were set up very first thing upon landing for the evening, and taken down last before rafting again in the morning. One was always in a tent for privacy, and the other was always a short distance away in a “hidden” location but in the great outdoors. The latter was the favorite of almost everyone, and made for a very memorable (if odd) bit of the great adventure.

PHYSICAL MOBILITY. For those who are reasonably athletic and used to hiking and climbing, this trip should hold no serious challenge. However, climbing on and off the rafts is a physical challenge, as is moving around on a somewhat slippery surface while rafting, and helping to unload and load the bags for camping at night. Likewise some of the hikes were a bit strenuous (and for those suffering fear of heights could be a bit scary)… but ALL of those activities were optional, and some folks opted out. So, the best advice is to just be honest with your own ability, mobility and agility. If in doubt, talk to the folks at Western before signing up… they are very competent and straightforward.

FINAL COMPLIMENT. At the end of the journey, the weather had started to close in for the flights out of Bar-10 Ranch to Las Vegas and/or back to Marble Canyon. Several in our group of 28 had tight airline connections out of Las Vegas, and the Bar-10 manager (who by then was the acting agent for Western River Expedition’s many departures) somehow was 2 seats short. We had a late night redeye back to Boston, so we volunteered to be those delayed to a later flight… which in turn ended up getting changed again enroute to drop off and pick up another company’s group. We were deeply worried that we’d get back to Vegas late and miss our (non-refundable) flight home, but Bar-10 Ranch had gone above and beyond on our behalf. Once we landed at the Vegas Boulder Creek municipal airport, the manager there was all set and put us in a private van for the 40 min drive to McCarran (LAS) with a stop to pick up a left bag at the Marriott.