Hard to Pick a Favourite Moment 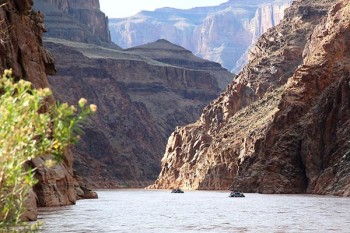 We were a gang of 24 friends from the US and the UK, coming together to celebrate the 50th birthday of our legendary ringleader, Michelle. Expectations were mighty high given the year or more the trip took to organise, and I'm delighted to report that our wishes were exceedingly surpassed from one moment to the next.

Some among us will freely admit that the most harrowing bit of the adventure was the 'weighing in' ceremony at the small, regional airstrip outside Vegas. Once that bit of admin was done we embarked on our first adventure: the small(ish) propellor driven airplane ride to the remote but gorgeous Bar 10 Ranch. The views from the air were stunning and the journey included a guided audio tour of the Hoover Dam and other attractions that we had bird's eye views of. The two pilots up front were all business and we soon touched down softly after about 45 minutes.

The Bar 10 sits very near to the rim of the Grand Canyon and celebrates its remoteness -- the nearest amenities are a bumpy 70 mile drive on dirt roads. But it's wildly impressive how well they host food and drinks. The ranch is served by a hearty natural spring several miles away and the fresh water is delicious and free flowing.

Our hosts at the ranch, several of them, had a median age of about 19. But the kids were natural leaders, fantastic cooks, storytellers and proper ropers and cattlemen/women. Our only bit of advice for your remarkably fun day and night there: say yes to everything.

We all enjoyed a bit of horseback riding, skeet shooting, local history, and an unforgettable sunset ATV ride to the spectacular edge of the canyon. The ATVs cost a bit extra but it was the only time we spent looking down into the canyon, and those views alone made it easily worth it.

Dinner that evening was a slow-cooked BBQ pulled beef from the grass fed stock managed by the ranch. It was epic. After dinner, the kids all treated us to a tremendously spirited talent show. It was a bit wholesome and patriotic, but they poured their hearts into it and their charm was infectious.

For many of us who travelled long haul to get to this area, the day and night we had at the ranch did wonders for clearing our minds and bodies and preparing us for the river adventure. And it felt very much like a mini adventure all its own, including sleeping under the stars on very well appointed cots (or in private covered wagons with open air rooftops if you so chose).

The arrival of the helicopters at around 9am heralded the next wave of fun. The choppers were modern, well orchestrated and seated about 4-6 of us depending on how much cargo they were also carrying. The rides down into the canyon lasted about 8 minutes, but you will remember every second of them. Absolutely brilliant, we had bruises from high fives and some minor facial paralysis from endless stupid grins. And the drop into the canyon can be felt somewhere in the marrow of your tailbone.

After a ridiculously rockstar arrival on a sandy strip at river's edge, we met our four guides (we were 2 boats of 13 people per boat, 2 guides per boat). It only took a few moments to load up our gear and get into our life vests, and that was followed by a precise and clear safety briefing. Then we were quickly underway and in the expert care and guidance of our four new favourite people on the planet.

Our trip was in the first week of June, meaning the daily temperatures were around 100f and the nightly temps only dropped to the mid 70s. Weather can be unpredictable and I can understand why they encourage packing layers. However, most of us stayed in quick dry shorts and t-shirts for the whole of the day and really enjoyed the occasional soaking that we got in the front of the boat while bounding and bouncing through the rapids.

At night, most of us stayed in shorts and t-shirts and were more than comfortably throughout the whole of the evenings. Some of the more chilly types did sleep in longer trousers and long tees.

Our journey put is into the lower half of the Colorado River, and over the course of 2.5 days of rafting, we encountered several series of rapids, and they seemed engineered to allow even the shyest of the riders to get accustomed to the action of the water. In fact, every single one of us ended up taking turns at the extreme front of the boat, as it became readily clear that the whole of the craft is entirely safe and being operated by trusted experts.

There are plenty of stops throughout the day for epic hikes, meals and the occasional dip in the river. Yes, the same 'cold' water you read about protecting yourself from while on the boat becomes the most refreshing and comfortable river to plunge and/or simply stand chest deep in after the boats pull ashore.

Our guides: Lucky, Kelly, Shad and Skinny were not only gifted pilots and local naturalists/historians, they were top chefs, hiking guides and camp engineers. The precision at which boats were unloaded and full kitchen, restroom and sleeping quarters were assembled and then broken down and reloaded was stunning.

Guests participate in loading and unloading using simple fire-line techniques, and are taught how to assemble their own tents and cots. (Skip the tents). But the guides, by far, do all of the heavy lifting.

And it's really hard to visualise just how much storage space the boats have, as every amazing meal was elaborate, varied and more than ample at all stops along the way.

A word on bathroom facilities. They're as clean and good as you can get while enjoying 'leave no trace' camping in such a pristine and fragile environment. And the handling and setup of them are managed entirely by your guides. There's running water at each spot (powered by a foot pump) and plenty of soap and hand sanitiser. Even cleaning items and deodoriser. There was always two choices of facility: one of them is a private four-walled tent. The other is a slightly more remote open air seat, and at every turn they offered the best bathroom views any of us have ever enjoyed. And there's a very easy system for ensuring privacy while using either. So all that's left regarding bathrooms is facing your own internal demons. But even the shyest among us got the swing of things after a day or so.

Some other notes: I think we over thought the drinks allowance. We ended up packing a good deal of it back up to the bus at journey's end. And, that's after we all had a reasonably fun time toasting the birthday girl every night. So don't sweat the maths as much as we did. It all works out, and you truly do crash shortly after sunset (8-9pm) and wake up with the sun (5am).

Cannot stress how unforgettable our adventure was. The visual stimuli of the canyons will carve new neural pathways in your head. There's simply not enough day-to-day brain cells to take it all in. You will conquer the rapids and promise to run the whole length (naked) the next time around. You will deepen and enrich friendships and family bonds immeasurably. And you'll make new lifelong pals as well.There's simply no way to step off those boats the same person you were when you got on them.

My final, endless, thanks to our intrepid and amazing guides: Skinny, Shad, Kelly and Lucky. You're all legends of your craft and the envy of us all. 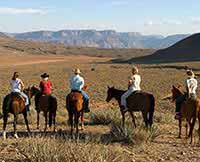