If The Apocalypse Comes, I’m Wearing My Rainsuit…Rafting The Grand Canyon 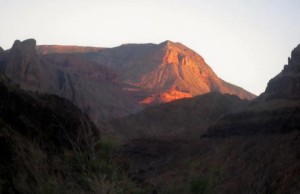 Having completed the daily grind, I lean back on the couch and notice the very odd suntan on my feet: a two inch band of brown skin between my neoprene booties and the cuff of my rain pants. A recent conclusion is when one is experiencing intensely elating and positive circumstances gifted by travelling, or learning, or RAFTING the Colorado River, TIME is measured in dog years. The Left Brain can remark the trip was only three days and two nights, but the Right Brain, (which is always dominate in this traveler) is certain it must have been much longer.

Exactly one week ago I was “sucking rubber” through some impressive rapids, scaling a series of ropes and ladders to enter a “slot canyon” and bailing like Geronimo from a cliff height measuring “F. U. N. on the Rectum Scale”,(a quote from an anonymous guide) into forty-five degree water. It was extraordinarily jubilant lunacy.

Confession must be made to a tiny bit of hubris, simply because I was not from Dallas, and I had done quite a bit of white water rafting. The river gods thrashed it out of me in a hurry; say by the second set of rapids? But I had committed myself to the front of the raft and hence remained there to prove my worthiness to the mighty Colorado.

That first day, we all commented to one another at different times and places that the views were truly overwhelming. The work of God, Gaia, and Water over unimaginable eternities was beyond what our bitty human brains could process. And it was a good feeling.

Yes, there were challenges (Flounder, I love you); yes, the rapids took away my need for roller coasters; yes, at times we were cold; yes, at times we were hot; yes we worked hard to unload the rafts to set up camp and YES, we hated (females) relieving ourselves in that frigid water. It a sure thing that we are all still shaking out sand from places sand should not go. But none of us would trade the adventure. It is ours forever and a treasure. We were a great group; there was always laughter, teasing, and what someone forgot, another had ample supply to offer. It brought out the best in all of us.

There are not enough superlative accolades to bestow upon our Western River guides. They NEVER stopped working. They provided instructions, demonstrations, lessons in geology, and legends of the Colorado River. One sat calmly at any point at which an intrepid traveler could falter to offer a strong and steady hand. They cooked “five-star” breakfasts and dinners, and constructed quick and tasty lunches. They also had to set up and take down our latrines and haul out the “produce” of twenty-four people. Wiley, Corey, Kelly, and Martin were quite simply incomparably, the best group of guides I’ve ever had the pleasure of knowing. The second night was “party night” and they donned party shirts, gave us hula hoops to play with, cooked surf and turf, a cake with icing and offered floor shows of fire batons and guitar serenading. I spent most of the evening flat on my cot watching the light play on the canyon walls and anticipating a second glorious starry night. A few of my party checked with me, but soon realized my solitude was all good. I was “stoned” on the Grand Canyon, exhausted, quiet, and serenely happy.

The “trip” or “chance” of a lifetime is a cliché’, but a good friend once said clichés become such because they are true. Another friend said not everything can be captured in a camera. There are moments which we simply must store in our memories.

A very precious friend called and said, “Hey—gotta group going to float the Grand Canyon, wanna come?” Contemplation lasted perhaps six heartbeats, before I said, “Yeah. Yeah, I’ll go.” It was on my “bucket list” but filed under, “someday”. My friend is not a “someday” person, nor will I be after this expedition. She has my profound gratitude for the offer.

After recounting a few adventures, my parents asked me if I would do it again. Not a single heartbeat elapsed before I said, “Yes.”